For an entire week, I forgave cooking (with one exception of steaming some greens) while I traveled to Oregon for a bit of a spring break.  My family decided to reunite for my grandparents’ 60th anniversary to show our love and support and, of course, to have a good time!  For the first half of the week, I spent my time in the beach town of Newport, which is quaint and serene.  After that, my immediate family and I stayed in Portland city proper, where I proceeded to die and reappear in vegan heaven!
Not only is the atmosphere of Portland very hip and relaxed, but its food scene is trendy, adventurous and all-encompassing.  You would be hard-pressed to find an establishment that did not have any vegan or at least vegetarian fare.  Every neighborhood had its own personality and its own local restaurant scene to match.  We tried to get a taste of everything we could, but there is only so much room in your schedule and your stomach.  I’m going to highlight some places I went to that I would highly recommend to anyone who visits the city.  There are so many other places I want to go…next time. 😉
There was a full breakfast/brunch menu which I took full advantage of.  As a vegan living on the East Coast (with the exception of NYC), it’s difficult to find decent breakfast or brunch options while dining out.  Harlow delivered.  They had a great selection of scrambles available with tofu or eggs over rice or quinoa.  YUM.  They also had house made granola, chia pudding, and pancakes.  Needless to say… 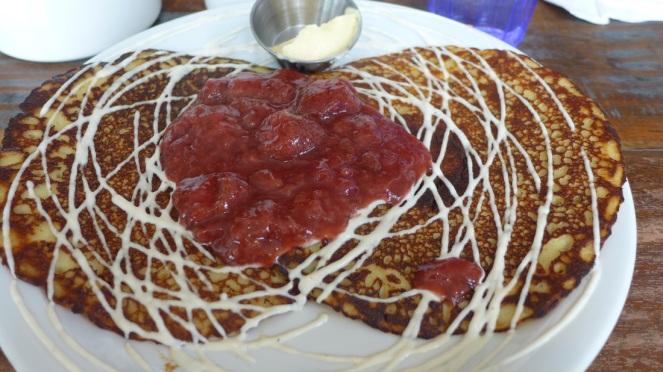 Yeah, I got the pancakes. 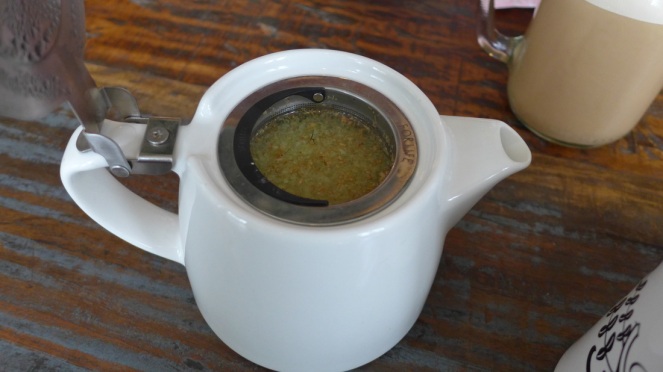 These are lemon quinoa pancakes with cashew cream and strawberry compote.  They were thin, crispy, not too sweet, and oh so tasty!  I also got some house made ginger tea to go with…it was spicy and woke me the hell up!


If you’re in need of groceries or a quick bite to eat, take a moment to visit Whole Foods in Portland.  The store is beautiful and currently under renovation, which promises more beauty!  There is an upstairs cafe, which I’ve never seen before in a WFM.  It was a nice little spot to grab a coffee or fresh pressed juice.  The vegan options were pretty good.  I happened to spot vegan raspberry rugelach in their tea cookie case, which felt like I had found a rare gem.  I had to have.  I also bought a Brew Dr. Kombucha, which is a local brand of…you guessed it, kombucha!  This is one of my favorite beverages on the planet.
Huckleberry PubIf you are ever in need of a happy hour, head over to the Northwest District.  My fam and I toured the suburban streets and found several local pubs and bars with creative drink and appetizer menus.  The first stop we made was at the Huckleberry Pub, a cozy place to crash inside of a renovated old home.  The bar is on the second floor in what probably used to be a bedroom.
I got a sweet little cocktail called the “I’m Your Huckleberry”.  It was packed with huckleberry flavor from both infused simple syrup and the berries themselves.  The staff here was friendly and easy to talk to.  They recommended other places for us to go to, which was super awesome. 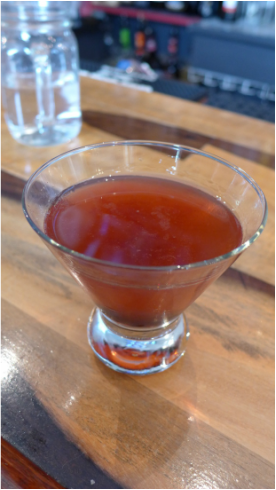 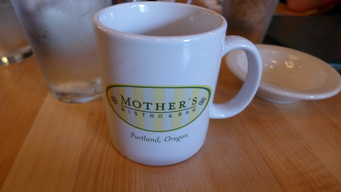 I got yet another amazing breakfast at Mother’s Bistro, a pretty well-known restaurant in the Pearl District of Portland.  There were plenty of people packed in there on a weekday morning, which is a good sign.  I was pleased to see that there was a hearty tofu scramble on the menu.  The plate was too hefty for my stomach, but it certainly tempted me to overeat!  There’s a ton of flavor in this dish from the fresh veggies.  The tofu was cooked well, too.  I accompanied my meal with a pot of gun powder tea.  Perfection.

If you’re craving something sweet and cheeky, definitely stop into Voodoo Doughnuts.  They’ve got a huge selection of freshly made doughnuts with attitudes and personalities of their own!  Click on the link to their website to see their…creative offerings. =P
They have a good amount of vegan choices, both raised and cake doughnuts to satisfy anyone.  I got a simple cake doughnut with chocolate glaze.  Even when I could eat conventional doughnuts, I went for the plain cake variety with cinnamon or glaze.  I never really got into the raised doughnut scene.  This was quite delicious, though.  It had a nice texture and a warming mix of spices running through it…mmm!

As a baker, I was on a mission to find a vegan and preferably gluten-free bakery to visit in Portland.  There were a few, but Petunia’s was the closest to where we were staying.  I dragged my sister out on a rainy morning to this adorable little bakery.  The space inside was so dainty and vintage!
The baked goods were also vintage; they were unassuming and casual, but absolutely delicious.  They tasted like something I would bake for myself and my family at home.
I managed to swipe the last Baked Alaska cupcake, which consisted of a baked raspberry filling and marshmallow coconut frosting.  The cake itself was extremely moist and mildly sweet, just how I like it!  The texture was slightly dense like a quick bread.  I wish I could have gotten one of everything, but all I could bring myself to get was one cupcake and a rather large slab of molasses cornbread.  Both were amazing and I want more!

Our trip would not have been complete without some form of Japanese cuisine.  My cousin recommended Biwa, a basement restaurant in a more industrial area of Portland.  There were more warehouses and suppliers in this part of town.  Biwa is almost hidden, which gives it an “exclusive” appeal.
The food is homestyle Japanese like ramen, grilled mochi, onigiri, and other restaurant staples like sashimi.
There are many items on the menu that can be prepared vegan by request.  I loved their small tapas-like portion sizes.  We all ordered a few things and then shared with each other.  I also found a wonderful drink called a kombucha-hai, which is a shochu cocktail with…you guessed it again, kombucha!  I can’t get enough, I swear… 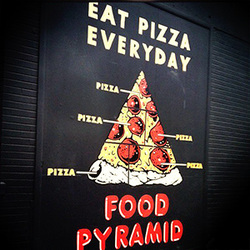 My last location is one that I do not have any photos of (sadly!).  When we happened upon Sizzle Pie, I was sans camera, which is a terrible state to be in while traveling.  My bad.
That didn’t stop me from enjoying some of the best vegan pizza I ever hoped to encounter outside of New Jersey/New York!  Sizzle Pie is doing something right!  Their crust is thin, crispy, and well-seasoned.  Actually, the entire pie was seasoned well.  There was not one ingredient that was anything close to bland.  My pie had vegan ricotta, artichoke, broccoli, spinach, and garlic.  Oh goodness.
My mom was on the moon when she saw they offered gluten free crust.  To her delight, the crust was amazing.  She never has high expectations for gluten free pizza crust since it can be hit or miss in restaurants.  But, like I said, Sizzle is doing something, or many things right.  Bless ’em! 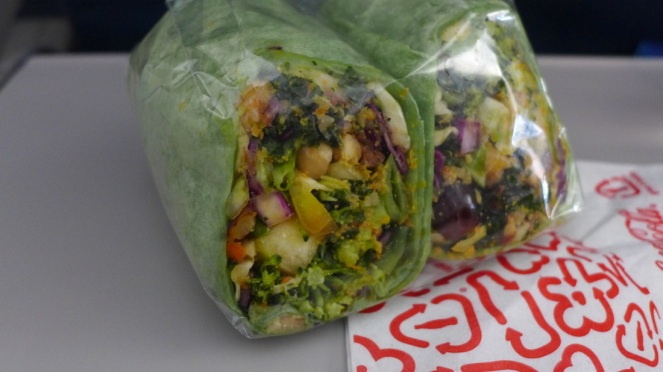 Before I left Portland, I was fortunate enough to score a vegan wrap at the PDX airport.  Oregon even caters to vegans when they’re leaving!  I will truly miss this awesome city.  I’m glad I could enjoy the culture even for a short stretch of time.  I’m already planning my trip back in my head!  Perhaps next time I’ll visit a food truck…or five.

I'm Jess! I'm continuing my original blog as a more plant forward space that features recipes with health and wellness in mind. I take my favorite things to eat, mix in my favorite flavors and cook them in a way that will promote my health and vitality as well as lower my impact on the planet. <3 View all posts by ichibanvegan

One thought on “Vegan Adventures in Portland”

Made choc chip pancakes yesterday because why not have brunch on a Friday? 🥞🍪
Favorite salad from @bethany_blues 💕 hope everyone is staying healthy out there 😷
Vegan apple muffin is the best muffin 😍🍏
Some tasty black eyed pea chili my mom and dad brought over 😍🌶🥑
Got an amazing #homemade scone from @kristinas.kitchen19 that is all vegan and totally delicious! Great to have quality food in the area ❤️🥰
Haven’t posted in a while- been working on other things (like life) but I’ve found a little time to actually cook breakfast for myself: tofu scram with broccoli, roasted potatoes, an @abesmuffins choc chip mini and @foodforlifebaking sesame toast 🥰☕️🍪🍞🥔🥦